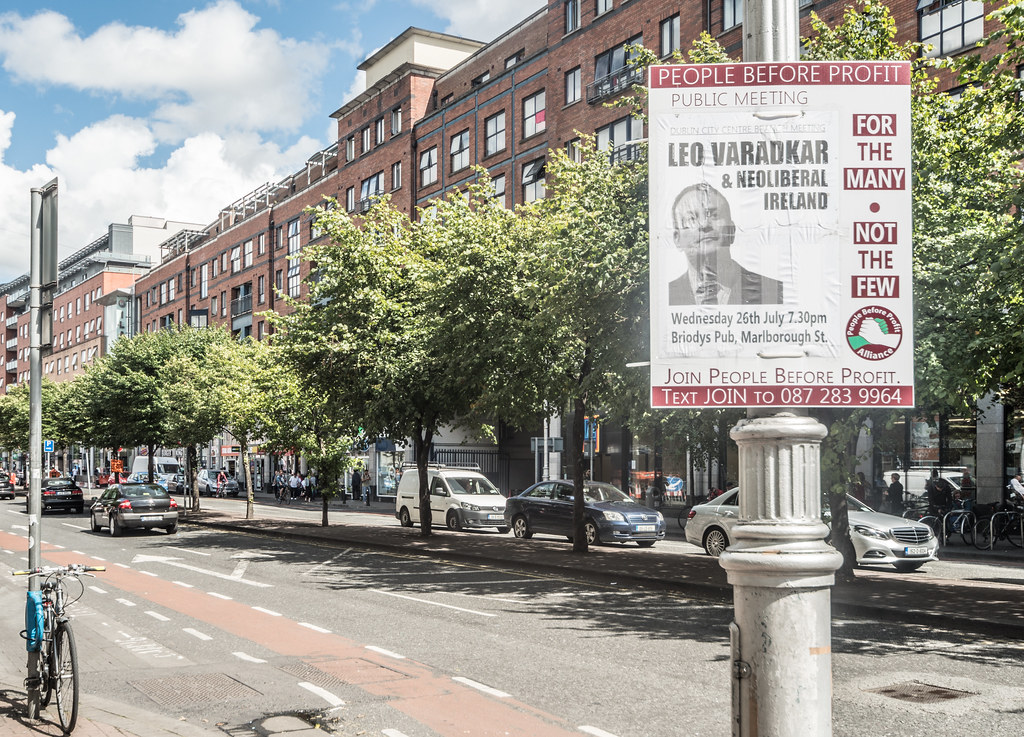 LEO VARADKAR AND NEOLIBERAL IRELAND 001
Neoliberalism refers primarily to the 20th-century resurgence of 19th-century ideas associated with laissez-faire economic liberalism. These include extensive economic liberalisation policies such as privatisation, fiscal austerity, deregulation, unrestricted free trade, and reductions in government spending in order to increase the role of the private sector in the economy and society. These market-based ideas and the policies they inspired constitute a paradigm shift away from the post-war Keynesian consensus which lasted from 1945 to 1980.


The term has been used in English since the start of the 20th century with different meanings, but became more prevalent in its current meaning in the 1970s and 1980s by scholars in a wide variety of social sciences, as well as being used by critics. Modern advocates of free market policies avoid the term "neoliberal" and some scholars have described the term as meaning different things to different people, as neoliberalism "mutated" into geopolitically distinct hybrids as it travelled around the world. As such, neoliberalism shares many attributes with other contested concepts, including democracy.


The definition and usage of the term have changed over time. It was originally an economic philosophy that emerged among European liberal scholars in the 1930s in an attempt to trace a so-called "third" or "middle" way between the conflicting philosophies of classical liberalism and socialist planning. The impetus for this development arose from a desire to avoid repeating the economic failures of the early 1930s, which were mostly blamed by neoliberals on the economic policy of classical liberalism. In the decades that followed, the use of the term neoliberal tended to refer to theories at variance with the more laissez-faire doctrine of classical liberalism, and promoted instead a market economy under the guidance and rules of a strong state, a model which came to be known as the social market economy.


In the 1960s, usage of the term "neoliberal" heavily declined. When the term was reintroduced in the 1980s in connection with Augusto Pinochet's economic reforms in Chile, the usage of the term had shifted. It had not only become a term with negative connotations employed principally by critics of market reform, but it also had shifted in meaning from a moderate form of liberalism to a more radical and laissez-faire capitalist set of ideas. Scholars now tended to associate it with the theories of economists Friedrich Hayek, Milton Friedman and James M. Buchanan, along with politicians and policy-makers such as Margaret Thatcher, Ronald Reagan and Alan Greenspan. Once the new meaning of neoliberalism was established as a common usage among Spanish-speaking scholars, it diffused into the English-language study of political economy. By 1994, with the passage of NAFTA and the Zapatistas' reaction to this development in Chiapas, the term entered global circulation. Scholarship on the phenomenon of neoliberalism has been growing. The impact of the global 2008–2009 crisis has also given rise to new scholarship that critiques neoliberalism and seeks developmental alternatives.
URBAN CULTURE INCLUDING STREET ART PHOTOGRAPHED IN 2019
STREET ART - PHOTOGRAPHED IN 2018
MORE EXAMPLES OF STREET ART
MINI-SITE: EXAMPLES OF STREET ART
PUBLIC ART
EVENTS
FESTIVALS
MAY 2020
APR 2020
MAR 2020
FEB 2020
JAN 2020
DEC 2019
NOV 2019
OCT 2019
SEP 2019
AUG 2019
JUL 2019
JUN 2019
MAY 2019
APR 2019
MAR 2019
FEB 2019
JAN 2019
DEC 2018
NOV 2018
OCT 2018
SEP 2018
AUG 2018
JUL 2018
JUN 2018
MAY 2018
APR 2018
MAR 2018
FEB 2018
JAN 2018
You will find links to buy products from Amazon, Google and other partners. If you click on these links, you’ll find that the URL includes a small extra piece of text which identifies that the click came from my websites. This text is an affiliate code, and it means that I get a small percentage of the money you spend if you choose to buy that product, or, in some cases, other products from the site soon after. These affiliate links help pay the costs of producing my websites and ensure that the content is free to you.